World War II and the End of the European Order

You know the drill.

1. Was World War II inevitable? Why or Why not?

2. Compare the strategies and tactics of World War I to World War II.

4. Trace the early successes of the Germans and Japanese.

5. Why were the Germans and Japanese unable to sustain their level of victories?

7. How did the entry of the United States accelerate Allied victory?

8. Describe how the war conferences contributed to the Cold War.

9. Can you think of any ways that would have kept India from dividing after independence?

10. Appraise the liberation of British, French, Portuguese, and Belgian non-settler African colonies. Discuss why the struggle for independence was remarkably different in settler colonies like Algeria, Kenya, and Rhodesia.

11. How did the white minority maintain power in South Africa?

12. How did the United Nations’ plans for the Middle East differ from what occurred? Discuss how the Zionist victory contributed to conflicts yet to be resolved. (If you have any viable solutions in mind, let the State Department and United Nations know!) 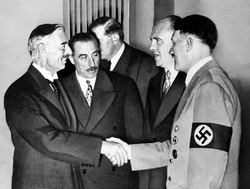 British Prime Minister Neville Chamberlain said that the Munich Agreement had achieved "peace in our time." Great Britain and France achieved this "peace" by agreeing to Hitler's aggressive moves. Assess this policy of appeasement by analyzing the following readings and answering the questions that follow.


If you need to review the Munich Agreement, go here first.

The National Socialist movement must strive to eliminate the disproportion between our population and our area--viewing this latter as a source of food as well as a basis for power politics. . . . We National Socialists must hold unflinchingly to our aim in foreign policy, namely to secure for the German people the land and soil to which they are entitled on this earth, , , , State boundaries are made by my and changed by man. . . . Germany will either be a world power or there will be no Germany. And for world power, she needs that expansion.

The crisis proved . . . that modern communication and enlightenment . . . reduce the chances of an outbreak of war. For the first time in history, a major conflict has been settled by talking instead of by shooting first. And, while [many people] deplored the dismemberment of central Europe's one island of democracy and were saddened for the painful uprooting of the minorities which will leave the ceded territories, realists took heart from one fact. . . . The Czechoslovakia rape had at least set a precedent, which might flower into a great influence for peace, for aggressors being persuaded to follow legal-diplomatic forms.

Questions/Reflection Topics:
1. In view of Hitler's statements on expansion, why would the Western democracies adhere to a policy of appeasement?
2. Develop an alternative response by France and Britain to Hitler's aggressive moves. What would have been the effect of this response?

Essay: The Challenge of Decolonization in Africa

Youtube: Decolonization via changing flags superimposed on an African map.