Although we won't have class time for discussions, you should be able to answer these.

1. What led to the failure of the Taika reforms and what was the political result?

2. Describe the nature of Japanese government between the Gumpei wars and the Onin war.

3. What was the nature of Japanese society and economy during the period of the daimyos?

4. How was Sinification imposed on Korea and how did it affect the social development of the country?

5. What accounts for the cultural differences between Vietnamese and Chinese?

6. What was the nature of Vietnamese government following the expulsion of the Chinese?

7. What were the common elements of Chinese culture passed to all three of the satellite civilizations?

1.  Discuss the impact of the shifting dynastic fortunes in China on the relationships of China to Japan, Korea, and Vietnam.  Which of the three states was the least affected by Chinese political developments?  Why?

2.  Compare and contrast the degrees of Sinification in Korea, Japan, and Vietnam.

On the Significance of the Tea Ceremony 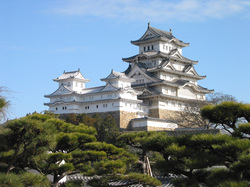 Special Features of Himeji Castle
Himeji Castle is nicknamed "White Heron" Castle because of its white walls which are covered with white plaster. The reason for using white plaster is that it is fireproof. Like other surviving Japanese castles, Himeji Castle is built of wood, not stones, and so fire prevention is very important. As well as the fact that white plaster has fireproofing capabilities, it is also considered to be a strong reinforcement. Therefore it covers both walls and almost every outside structure from eaves to pillars. The castle is built on the top of a hill called Himeyama, which is 45.6 meters above sea level. The main tower, which is the center and the symbol of the castle, is 46.4 meters high; namely, it stands 92 meters above sea level. Himeji Castle is famous for not only this huge main tower but also the highly effective and complicated defensive design, which is just like a maze. Even today, with the route clearly marked, many visitors are easily lost. You, too, may be lost in the labyrinth of this virtual tour.

History
The history of the castle began by the construction of a fort by Norimura Akamatsu, the ruler of Harima District (Himeji region) in 1333. Later in 1581, a three-storied castle was built by Hideyoshi Toyotomi when the country was in a state of continual conflict. In 1601 Terumasa Ikeda, son-in -law of the Shogun Ieyasu Tokugawa, started rebuilding the castle into a five storied main tower with three small towers since Himeji was a very important defensive position for the Tokugawa shogunate government. It took Ikeda eight years to complete the reconstruction. Fortunately, Himeji Castle has never been damaged by warfare, even during the Second World War. That is one of the reasons why Himeji Castle has kept its original form for nearly 400 years. In 1993, Himeji Castle was registered on UNESCO's World Heritage list, because it is a wooden castle structure of incomparable worth in the world and because the whole structure including towers, stone ramparts, and earthen walls are extremely well preserved.

A quick rundown on sinification.