Contents on this Page

2. In what way did the Dutch control of Java provide a model for pre-19th
century  imperial advance?

3. Contrast European social interaction with indigenous peoples before and after
1850.

4. What were the motives behind the global scramble for colonies?

6. How did 19th-century European imperialists transform their methods of
economic extraction?

7. In what ways were European colonial systems vulnerable?

8. Compare European imperialism in the initial period after 1450 to the colonial
movement between 1750 and 1914.

9. Discuss 19th-century imperialism by advancing the viewpoints of an imperialist
and a member of a colonized society. 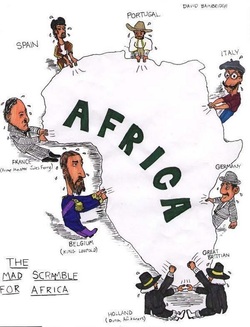 History shows me one way, and one way only, in which a state of civilisation has been produced, namely, the struggle of race with race, and the survival of the physically and mentally fitter race.

This dependence of progress on the survival of the fitter race, terribly black as it may seem to some of you, gives the struggle for existence its redeeming features; it is the fiery crucible out of which comes the finer metal. You may hope for a time when the sword shall be turned into the ploughshare, when American and German and English traders shall no longer compete in the markets of the world for raw materials, for their food supply, when the white man and the dark shall share the soil between them, and each till it as he lists. But, believe me, when that day comes mankind will no longer progress; there will be nothing to check the fertility of inferior stock, the relentless law of heredity will not be controlled and guided by natural selection. Man will stagnate....

The path of progress is strewn with the wreck of nations; traces are everywhere to be seen of the hecatombs of inferior races, and of victims who found not the narrow way to the greater perfection. Yet these dead peoples are, in very truth, the stepping stones on which mankind has arisen to the higher intellectual and deeper emotional life of today.

Questions:
1: How does the author connect Darwin's ideas to the concept of human progress?
2: Is it reasonable to equate biological species with human societies, races, or nations? Explain.
3: What arguments can you make against the author's assertions?
4: Consider the vantage point of the author and the passage's intended audience. How does this add perspective to your analysis of the passage? 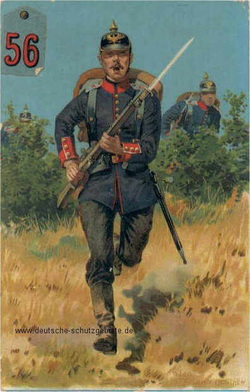 I located this passage here.

The first effective quick-firing gun was invented in 1862 by an American Richard Gatling. The Gatling gun was made with ten barrels and could fire six hundred shots a minute. This, and models like it, had to be operated by a hand crank.

In 1885, another American, Hiram Maxim, built a gun that used its own recoil energy to load and fire itself and to eject its own empty shells. This eliminated the need for a hand crank and created the first fully automatic machine gun. A soldier only had to hold the trigger, and the gun would keep firing until its ammunition was gone. The gun was supplied with ammunition by a mechanically fed canvas belt easily stored in a box. The belts could be changed rapidly. The gun weighed only 40 pounds and could fire 650 rounds a minute.

Of course, governments were quick to see the advantages of the Maxim machine gun. The British army was using it by 1891. From its beginning, the machine gun played an important role in the ability of Western armies to subdue peoples who were not yet armed with this weapon. At the battle of Omdurman in 1898, when Sudanese tribespeople tried to stop a British expedition armed with the recently developed machine gun, the Sudanese were massacred. One observer noted: "It was not a battle but an execution....The bodies were not in heaps--bodies hardly ever are; but they spread evenly over acres and acres. Some lay very composedly with their slippers placed under their heads for a last pillow; some knelt, cut short in the middle of a last prayer. Others were torn to pieces." The battle casualties at Omdurman tell the story: twenty-eight British deaths to eleven thousand Sudanese. The machine gun began a new era in deadly warfare.

Questions:
1. What was revolutionary about the gun invented by Richard Gatling?
2. How did the machine gun affect the Western world's ability to dominate the non-Western world?
3. Why did such technology emerge in the West but not the East or Africa (if Social Darwinist arguments are erroneous)? 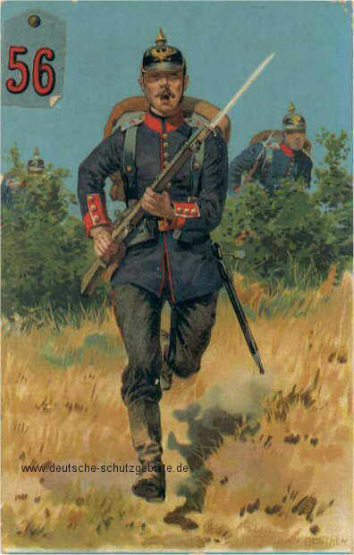 
Background
Germany was a late arrival in the competition for colonies. The territories still available were neither profitable nor attractive for settlement by Europeans. Carl Peters (1856-1918) was one of the growing number of Germans, who, nevertheless, were eager to acquire a colonial empire. He was the founder of German East Africa, now Tanzania. His arguments based on economic advantage and the prospects of German emigration proved to be absurd and provided a mask for less rational motives.


Manifesto of the Society for German Colonization, April 1884

In the partition of the earth, as it has proceeded from the beginning of the fifteenth century up to our times, the German nation received nothing. All the remaining European culture-bearing peoples possess areas outside our continent where their languages and customs can take firm root and flourish. The moment that the German emigrant leaves the borders of the Reich behind him, he is a stranger sojourning on foreign soil. The German Reich, great in size and strength through its bloodily achieved unity, stands in the leading position among the continental European powers: her sons abroad must adapt themselves to nations which look upon us with either indifference or even hostility. For centuries the great stream of German emigration has been plunging down into foreign races where it is lost sight of. Germandom outside Europe has been undergoing a perpetual national decline.

This fact, so painful to national pride, also represents a great economic disadvantage for our Volk. Every year our Fatherland loses the capacity of approximately 200,000 Germans. The greatest amount of this capacity flows directly into the camp of our economic competitors and increases the strength of our rivals. Germany's imports of products from tropical zones originate in foreign settlements whereby many millions of German capital are lost every year to alien nations. German exports are dependent upon the discretion of foreign tariff policies. Our industry lacks an absolutely safe market for its goods because our Volk lacks colonies of its own.

The alleviation of this national grievance requires taking practical steps and strong action.

In recognition of this point of view, a society has been organized in Berlin with the goal of mobilizing itself for such steps and such action. The Society for German Colonization aims to undertake on its own, in a resolute and sweeping manner, carefully chosen colonization projects and thereby supplement the ranks and organizations with similar tendencies.

Its particular tasks will be:

Imbued as we are with the conviction that it is no longer permissable to hesitate in energetically mobilizing ourselves for this great national task, we venture to come before the German Volk with a plea for active support of the endeavors of our Society! The German nation has proven time and again its willingness to make sacrifices for general patriotic undertakings: may she also bring her full energies to play in the solution of this great historical task.

Every German whose heart beats for the greatness and the honor of our nation is entreated to come to the side of our Society. What is at stake is compensation for centuries of deprivation: to prove to the world that, along with the splendor of the Reich, the German Volk has inherited the old German national spirit of its forefathers!

1. What reasons does Peters give for Germany to seek colonies?
2. What assumptions does he make about their advantages?
3. What do you think were the most important motives for colonization to Peters and those who supported his policy?